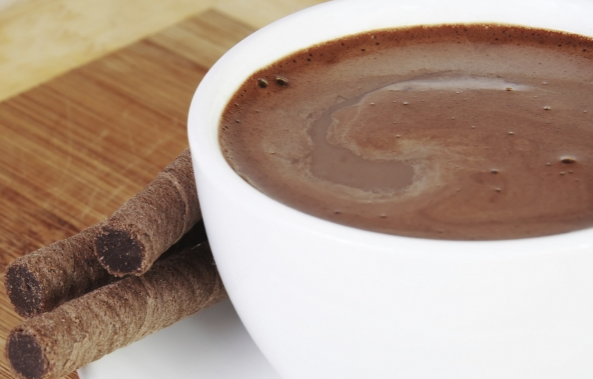 Today hot chocolate might be thought of as a creamy treat for kids after a day of sledding and snowball fights, but it has been a source of strength and wellness for thousands of years. Between 3,000 and 4,000 years ago, cacao plants were first cultivated in Mesoamerica by the Olmec, living in southern Mexico. Rather than eating chocolate in solid form, however, the nibs from the cacao plant were ground into a paste and mixed with water to make a chocolate drink known as “xocolātl.” In order to achieve its frothy consistency, the mixture was poured back and forth between two bowls or jugs. It was found to be an energy booster and mood enhancer, as well as providing long-lasting sustenance; these positive nutritional effects led the Olmec to believe the drink possessed mystic qualities, so it was generally reserved for important figures at sacred ceremonies.

In addition to rejuvenating soldiers battling the enemy, hot chocolate was also used by explorers battling the elements. In early 20th-century expeditions to the North and South Poles, hot chocolate provided warmth, nutrients and energy boosts to weary explorers—though it wasn’t always enough. Captain Robert Falcon Scott and his crew of four other men reached the South Pole on January 17, 1912 after traveling for over a year on a diet that consisted largely of hot chocolate and stew; unfortunately these rations did not adequately sustain the physical exertion the journey required, and Scott and his men died of hunger and exhaustion on their return trip.